For the second year, UNIGAMER is sponsoring the University Championship event, which takes place in the city of Shijiazhuang in Hebei Province.

The event was sponsored and hosted by the China Chamber of Electronic Commerce (CECC), Hebei Provincial Government, Shijiazhuang Municipal Government, and sponsors such as Dell, Mackenzie Ex, Xiberia and Unigamer. The WESCO event took place at the world’s largest Digital Economy Expo, CIDEE (China International Digital Economy Expo). The WESCO space was the largest at the fair, with 850m2 (eight hundred and fifty square meters) dedicated entirely to e-sports. At the event, Public Enemy rapper Samy Sam performed 2 days of shows, and WESCO had its debut with the official display of its esports uniform, and also its official esports chairs and keyboards.

At the event, there was also the official launch of two sports projects involving social inclusion, sustainability, education and sport, the Changing the People, the Changing the World project and the Sports Ambassadors.

With the international esports ambassador, the former captain Brazilian football athlete and the five-time FIFA World Cup winner, the CAFU athlete, both programmes were launched and are now being implemented in China as a pilot country, and after that will go to Africa in 2020 in 5 chosen countries. In these countries, Sports and Football Training Centres will be opened, bringing together the most widely played sports in the world, to avoid dropping out, bring sustainability to the National Federation that will work together with the Training Centre, and bring children and adolescents. The National Football Federation, education, social inclusion and involvement in sport. This will benefit the people and the country in unique ways.

“Being an ambassador for sport at WESCO is an honourable and extremely important task because we are the example for future athletes and sports professionals, regardless of their area of choice, and we need to promote sport as a training tool for the citizens of the world,” said Cafu.

The athlete Cafu, who visited the fair, made alongside the president of WESCO, Mr Daniel Cossi, the inaugural speech, visited the Shijiazhuang Primary and Elementary School, where he was received with joy in a special moment for the children.

After that, Cafu visited the Shijiazhuang Sports University, where there was another warm welcome for the sports celebrity and a meeting with the Rector of the entity and local and national interviews. WESCO President Mr. Daniel Cossi was hosted with CAFU at a dinner hosted by the Hebei Provincial Secretary of Sports, where information was exchanged and excitement about the arrival of the programme “Change the People, Change the World.”, to the city of Shijiazhuang.

A WESCO delegation, including Mexico, Brazil, Belgium, Mongolia, Ivory Coast, USA and South Korea, was together with CAFU and the WESCO president, and its regional vice president, with the WESCO vice president of Asia. Kenneth Chang, at a special dinner hosted by the CECC. Mexico’s giant international television company, TELEVISA, was a guest at the event, bringing all the information to the Americas. China’s CCTV television company was also on-site, as well as various television media, journalists and Internet from Hebei Province and Shijiazhuang City.

There was the university competition “FIFA” and “Arena of Valor” where the American woman came second, and the Mongolian athlete came first. UNIGAMER also add some special Pink Gaming chairs for woman/girls because we do devices for all the people, all should be included in gaming (games are not only for the boys right?) 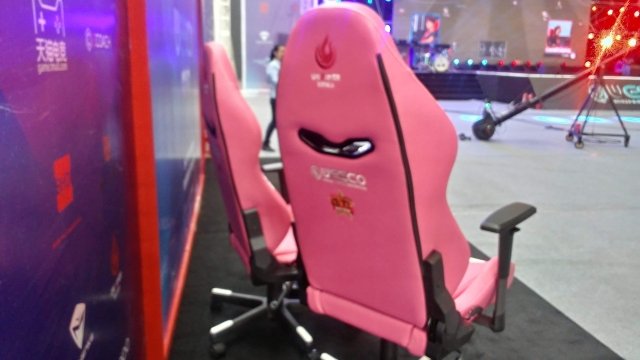 “WESCO will promote this kind of competition every year as it brings more legitimacy and responsibly and educationally promotes e-sports around the world, this event has an audience of 25000 people in the 3 days of the event who will visit the venue. WESCO and will learn that e-sports is conducted in a social, educational and responsible way beyond the professional. “Said the Vice President of WESCO Asia Region, Mr. Kenneth Chang.

In addition, representatives from each country were able to attend the inauguration of the “Countries’ Alliance for Technology” hosted by CECC at the Technology, Innovation and Sports Summit. At this inauguration, representatives from each country, marked on specific plaques, the casts of their hands, will be displayed in the CECC members’ hall for eternity.

“For us at WESCO, having achieved all this in 2019 is a unique milestone, we promote e-sports, sustainability, innovation and commitment to e-sports promoted responsibly, educationally, professionally and committed to Olympic values. With the “Change the People, Change the World” programme and also the Esports Ambassadors, we will give children and youth, the opportunity to take classes in English, Spanish, Computer Programming, Mathematics, and also technical classes such as Esports Coach, Esports Athletes, Esports Commentator, Caster and many other opportunities, giving the country and its national federation opportunities to bring themselves and also promoting its citizens and creating better citizens for the world” said WESCO President, Mr. Daniel Cossi.